Before I was pregnant I didn’t have a clue about newborn babies, older toddlers and children yes, but not the faintest idea what to do with a completely dependant tiny being. Throughout my pregnancy ‘breast is best’ was drummed in to me from here, there and everywhere. My auntie Jo is an (amazing) midwife and whenever we saw each other that was always her biggest ‘must’ for me. So I just decided during pregnancy that yes I would aim to try and breastfeed for the first 6 months and that was the last I thought about it, it never bothered me or didn’t seem like it would be a challenge….

Well, NOBODY decided to tell me what trying to breastfeed a tiny newborn baby was actually like… Firstly, getting them to actually latch on. You would think it would and should be simple, well it’s really not, unless you are very fortunate. Ava used to get so frustrated and upset which then intern made me all upset, hot and stressed out. Which wasn’t a good combo.

Then the pain… O.M.Goodness! Once Ava actually latched on it was the most sensitive, uncomfortable and down right sore feeling. I had to brace myself before each feed, start doing deep breathing and take my mind somewhere else…. It really does unfortunately hurt.

Then came mastitis (on one side) which I tried treating with hot flannels and cabbage leaves (which actually did help) and trying to feed through it, which is very uncomfortable. Then cracked nipples which I treated with lansinoh cream which did work but if I had my time again I would of used coconut oil because it’s so pure!

Anyway geez I’m making it all sound pretty grim! Which to me I suppose it kinda was… It really was hard work! After about 2 weeks of Ava being born I remember being awake in the middle of the night and being really upset. I just wanted to give it all up. I was just completely and utterly overwhelmed. Breastfeeding was too much. With the lack of sleep and everything else that comes with being a brand new mother I threw in the towel. I was going to try a bottle in the morning… 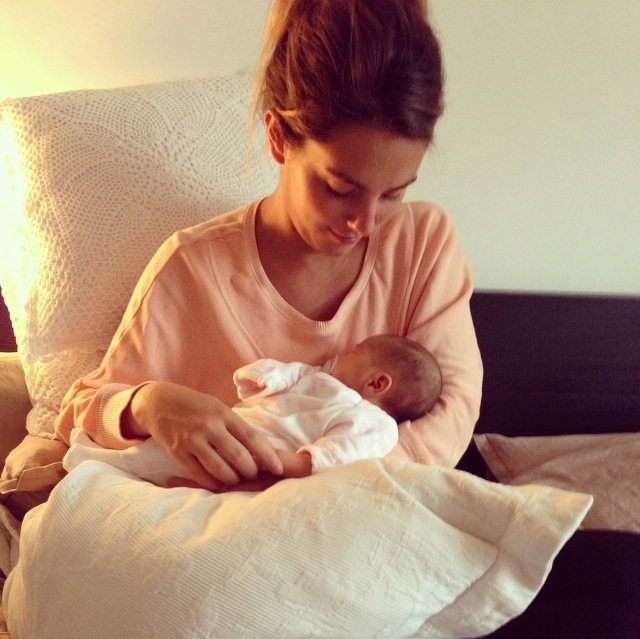 I had expressed milk with the Medela pump (which although expensive it is really worth it) and thought if it worked I was going to make the switch. I couldn’t deal with the pain anymore. But mini Pearl was having none of it. No interest in a teat whatsoever. She knew which was the real deal and would just turn her head away and fight with the bottle. She obviously needed milk so I had to give in and try and feed her myself. Nooooo.

We got into the usual back aching position and voila. Huh?! she latched on straight away. And although it still hurt, it wasn’t as toe curling as usual. Something had shifted and we had figured it out.

I don’t know what hurdle we had overcome but after the first 2-3 weeks (which feel like forever when you are in them) Ava and I got our feeding relationship a bit more sorted. Not saying that was it, all fine and dandy. I’ve still had issues with mastitis now and Ava is nearly 18 months old. But It works for us and I find it so much more convenient. I’m really not a routine kind of mum (tut, tut) so the madam gets her milk when she asks for it. But I just kinda think that’s how it should be. Apart from not sleeping through the night and still taking over the middle of our bed and pulling my top down in public when she wants milk. Feeding has been very handy, when Ava has ever fallen over or is upset it helps to calm her really quickly.

It’s the best you can offer your baby nutritionally, helps to shift those extra baby pounds and it’s free! I keep giving age limits on when I’m going to stop but I never stick to them. I know it will just feel right as and when…

Oh, one more thing I have to warn you of… Midwives lie when they tell you breastfed babies don’t get colic. Standing by a tap for the ‘white noise’ effect for hours at a time used to work for us (I found out later there is a white noise app which was a godsend).

Every baby is different and every situation that each mother is put in is different, our journeys are all our own, as long as we do what WE believe is best for our little children then it’s all going to be worth it in the end.

8 thoughts on “Breastfeeding… My challenge”